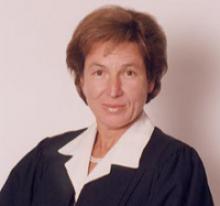 Judge Ellen Segal Huvelle was appointed to the United States District Court in October 1999.  She received a B.A. from Wellesley College in 1970, a Masters in City Planning from Yale University in 1972, and a J.D. from Boston College Law School in 1975.  Following law school, she served as law clerk to Chief Justice Edward F. Hennessey of the Massachusetts Supreme Judicial Court.  From 1976 until 1984, Judge Huvelle was an associate at the firm of Williams & Connolly and in 1984, she became a partner at that firm.  She was appointed Associate Judge of the D.C. Superior Court in September 1990 and served in the Civil, Criminal and Family Divisions until her appointment to the federal bench.  Judge Huvelle has been a Fellow of the American Bar Association, a member of the Edward Bennett Williams Inn of Court, and has taught trial practice at Harvard Law School's Trial Advocacy Workshop and at the University of Virginia School of Law.