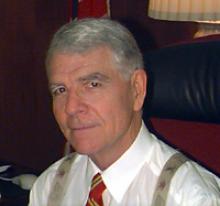 Judge Hogan was appointed to the United States District Court in August 1982, became Chief Judge on June 19, 2001, and assumed Senior Status in 2008.  He graduated from Georgetown University, receiving an A.B. (classical) in 1960.  He attended George Washington University's masters program in American and English literature from 1960 to 1962, and he graduated from the Georgetown University Law Center in 1966, where he was the St. Thomas More Fellow.  Following law school, Judge Hogan clerked for Judge William B. Jones of the U. S. District Court for the  District of Columbia from 1966 to 1967.  He served as counsel to the National Commission for the Reform of Federal Criminal Laws from 1967 to 1968, and was engaged in private practice from 1968 to 1982.  He has been an adjunct professor of law at the Georgetown University Law Center and a Master of the Prettyman-Leventhal Inn of Court.  Judge Hogan served as Chair of the Executive Committee of the U.S. Judicial Conference, Chair of the Courtroom Technology Subcommittee, and served on the Board of the Federal Judicial Center.